The Sailing Stones of Death Valley 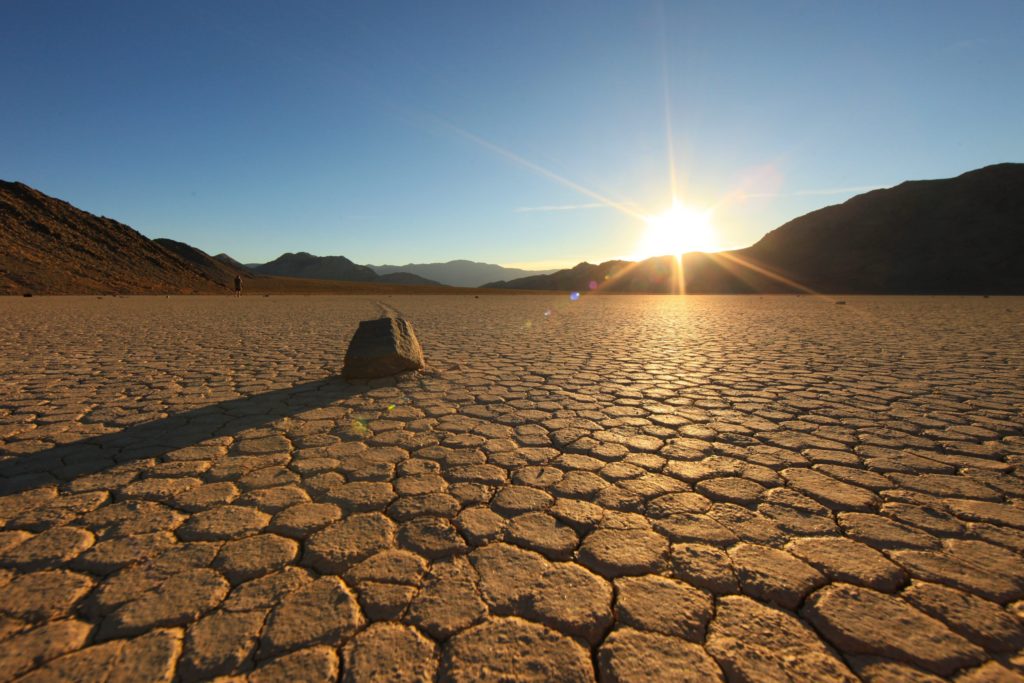 Death Valley National Park is a strange place by any standard. Famously known for being the hottest place on earth, Death Valley also sits at the driest and lowest elevation in North America.

Its strangest feature of all is the mysterious Racetrack Playa. Here, rocks drift across the flat desert landscape, seemingly propelled by no power other than their own!

The mystery of the sailing stones
Located on the border of California and Nevada, Death Valley National Park was designated in 1933, and is home to one of the world’s strangest phenomena: rocks that move along the desert ground with no gravitational cause. Known as “sailing stones,” the rocks vary in size from a few ounces to hundreds of pounds. Though no one has ever seen them actually move in person, the trails left behind the stones and periodic changes in their location make it clear that they do.

Scientific explanations
The rocks of Racetrack Playa are composed of dolomite and syenite, the same materials that make up the surrounding mountains. They tumble down due to the forces of erosion, coming to rest on the parched ground below. Once they reach the level surface of the playa, the rocks somehow move horizontally, leaving perfect tracks behind them to record their path.

Many of the largest rocks have left behind trails as long as 1,500 feet, suggesting that they’ve moved a long way indeed from their original location. Rocks with a rough-bottomed surface leave straight tracks, while smooth-bottomed rocks tend to wander. The sailing stones have been observed and studied since the early 1900s, and several theories have been suggested to explain their mysterious movements.

In 2014, scientists were able to capture the movement of the stones for the first time using time-lapse photography. The results strongly suggest that the sailing stones are the result of a perfect balance of ice, water, and wind. In the winter of 2014, rain formed a small pond that froze overnight and thawed the next day, creating a vast sheet of ice that was reduced by midday to only a few millimeters thick. Driven by a light wind, this sheet broke up and accumulated behind the stones, slowly pushing them forward.

Visiting the Racetrack
To see the moving rocks of the Racetrack Playa, drive 2 miles south of the Grandstand parking area. While the precise location of the sailing stones is always changing, you can usually get the best view by walking about a half-mile toward the southeast corner of the playa.

When you do visit, please do not disturb the rocks or their tracks. Following rain, the playa becomes muddy, so be careful to avoid approaching the rocks and leaving unsightly footprints during wet conditions. Driving off established roads is also prohibited.

The sailing stones of Death Valley continue to baffle park visitors and scientists alike. We may think we have found the answer to their movement, but who knows what other secrets lie in Death Valley? Pay a visit and see if you can come up with your own theory about this great phenomena.

To learn more interesting facts about national parks across the system, check out our entire free Owner’s Guide series – you’ll find great travel ideas and inspiration for your next adventure!