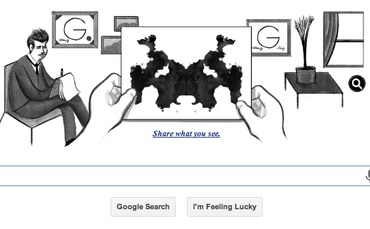 The Rorschach test, created in 1921, is comprised of 10 symmetrical “inkblot” images. Subjects of the test are asked to interpret what they see in the designs. The test allows for psychoanalysis of the subject’s cognition and personality traits.

This time around, Google’s interactive Doodle has a unique social component that allows users to share what they see in the various inkblots as they scroll through the choices.

Here’s the Doodle in action: Clicking on the Twitter option, for example, will pre-populate your tweet with the words “I see…” and the hashtag #RorschachDoodle, plus the link to the inkblot you’re interpreting.

Rorschach was born in 1884 and prior to joining the scientific field, was reportedly torn between the arts and sciences. As a child, sources say he was very interested in klecksography – the art of creating images from inkblots. In the end, Rorschach combined his love for the art and his interest in science to create his life’s work in the inkblot test.

Rorschach died in 1922 – the year after publishing his book, “Psychodiagnostik,” which was the foundation of the inkblot test. He was 37. Which is the best search engine for finding images?
Google IPO To Happen, Files For Public Offering