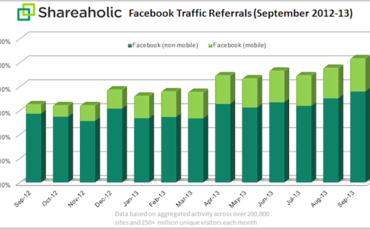 Facebook mobile traffic to websites was up approximately 253 percent year-over-year in September 2013; this, according to social media-sharing company Shareaholic, which released data last week.

Findings show that Facebook referral traffic grew a total of 3.84 percentage points from September 2012 to September 2013, with mobile seeing nearly a 2-percentage-point growth. This data comes on the heels of last week’s Facebook announcement of third-quarter earnings, which showed mobile ads accounted for 49 percent of its $1.8 billion third-quarter advertising revenue. This number is up from second quarter’s 41 percent.

“Make sure your site is fully optimized for mobile browsing. Let’s face it. No one really enjoys pinching and zooming, or finger dragging, to read or see anything. Your visitors will thank you for it.”

What do you need to know about Chinese search engine Sogou?
HotBot’s New Desktop Search Toolbar