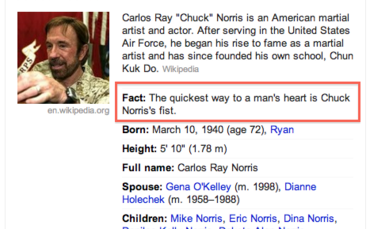 The old Chuck Norris Google joke used to be in the form of a top ranked parody site that read “Google won’t search for Chuck Norris because it knows you don’t find Chuck Norris, he finds you” found by hitting the “I’m Feeling Lucky” button.

Well, Google has finally produced its own humorous Chuck Norris results. Found in the Knowledge Graph feature, located to the right of Google’s main results, Google users are treated to a variety of “facts” about the television and movie actor, which are seemingly being pulled from the Chuck Norris Facts site.

Google is listing at least 10 “facts” about the “Walker, Texas Ranger” star: